Following its construction in 1873 the chateau was first used as a private residence and in the early 20th century was expanded for this purpose.

Later, during the Russian revolution, it was also used to accommodate White Russians who had fled their country. Another of the uses to which it was later put was as a rehabilitation centre for sick children.

Data-sheet
An overview of all information can be found by clicking on the datasheet below. 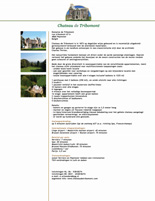